I've used vim as my primary editor/IDE for the past 10 years. Back then I was writing data-analysis code over an ssh session to hosts in the SLAC computing center in California while sitting several thousand miles away in front of a terminal in the UK and a friendly post-doc showed me this nifty looking editor that he was using...

Since then I've been tempted away by a few shiny IDEs but always give up and come back to the venerable editor (one exception to this is intellij as it's a wonderful refactoring-engine for Java. By comparison Pycharm is rubbish IMHO).

And so I thought it might be useful to post about my .vimrc file explaining what the various plugins and configuration options do. Since I've been writing a lot of python over the past year there's a bias here.

This scope of this post creeped up but it is mainly:

If you want to skip to the goods you can clone my dot-files repo and run vim.sh to download and install all of the plugins below.

Updating to a more recent version of vim is usually trivial though, for Debian/Ubuntu you can do:

If you don't have vim-8 installed all the plugins except ALE will work anyway.

Let's start with Vundle: a plugin manager for vim that also fetches plugins straight from Github. We start by setting the runtime-path (where Vundle will download the plugins files).

NERDTree is for exploring the file-system and is sometimes useful for jumping between files in your current project. Personally I don't like this being open on-startup.

ctrlp is the most useful way to navigate between files while working on a project IMHO.

Quite simply, press Ctrl+p while in normal mode to open a buffer that will match to filenames in the directory you're in (and recursively in it's sub-directories). The options I've set will:

The vim-fugitive repo says it better than I could:

As someone that uses vim-fugitive to interface with git every day I don't consider this an understatement. This is a large topic but my top highlights are:

Bonus: configure git to use vimdiff

vimdiff is a diff-tool that opens a vertical-split window in vim. I find it much easier to see what's changed than when using git's in-built diff tool. Here we jump to my .gitconfig:

We can now look at the output of git diff in vimdiff. For example, to diff the curreent index with two commits ago you can do

Highlights of this method is that when navigating the file in either window:

lightline allows you to configure a snazzy status bar (at the bottom of the window). The snippet below will show:

This produces the following status bar:

Many people use syntastic for syntax highlighting in vim. It has one drawback which is that it runs synchonously in the main UI thread. ALE (Asynchronous Lint Engine) is arguably an asynchronous successor.

Here are a few plugins that are great for python specifically.

jedi is probably the best auto-completion library for Python that I've ever used (including Pycharm). jedi-vim requires that your vim binary was compiled with the python/python3 option but that's pretty much guaranteed unless you're compiling vim yourself.

Anyway, this is another large topic but here are a few highlights:

Below shows a few of these in action:

Personally I find tags of limited use, but they're handy for exploring a new or otherwise un-familiar codebase. Here we use tagbar.

Note, this requires ctags or similar to be installed, so for Debian/Ubuntu:

Then we can toggle the tagbar window with :Tagbar and navigate code at a higher level of abstraction, as shown below.

Honourary mention to vim-go and rust.vim which provide great integration for those languages too.

Also, for keeping a work-log or wiki I can't recommend vimwiki enough: it is like an even-better org-mode ;-)

This isn't a plugin but something I find useful for essentially caching the list of updates to a file such that if you close and re-open a file you can undo the last few edits (note, most vim distros in the wild will be compiled with the persistent_undo")

It's possible to set the colour-scheme directly in vim but these days most terminals (terminator for linux and iTerm2 for mac) have solarized colour schemes baked in. Once set, vim will use these and the job is done.

On a different note, tmux is a wonderful way to multiplex teminal sessions and I find it complements vim very nicely.

I could probably fill an equally lengthy post about tmux.

Again, this is a much larger topic but here are a few tricks I find useful:

Warning: this section is opinionated.

You might ask: why bother with all this? Surely [insert GUI-based IDE + whatever else] is good enough?

Well, it may be good enough. But often when working on some data-analysis or building some service what matters far more than the length of time spent working is how long I can spend in a state of flow. This usually means being focussing on one thing; being un-distracted. Using this editor is a great way of staying focussed and minimising the operational overheads of software engineering.

Conversely, these have the opposite effect:

So in a way these plugins and hotkeys are a way of making it easier to stay in the flow.

Most package managers will distribute binary versions of vim 7.4.XXXX which is fine. There are many reasons to update to vim version 8.X is but perhaps the biggest is that it allows tasks to be performed outside the main UI thread. All of the plugins we'll discuss will work fine with either version except for the ALE plugin that requires version 8+. Also, certain commonly-enabled compilation flags (python and persistent_undo are assumed).

Putting it altogether, what I focus on while working usually looks something like this. 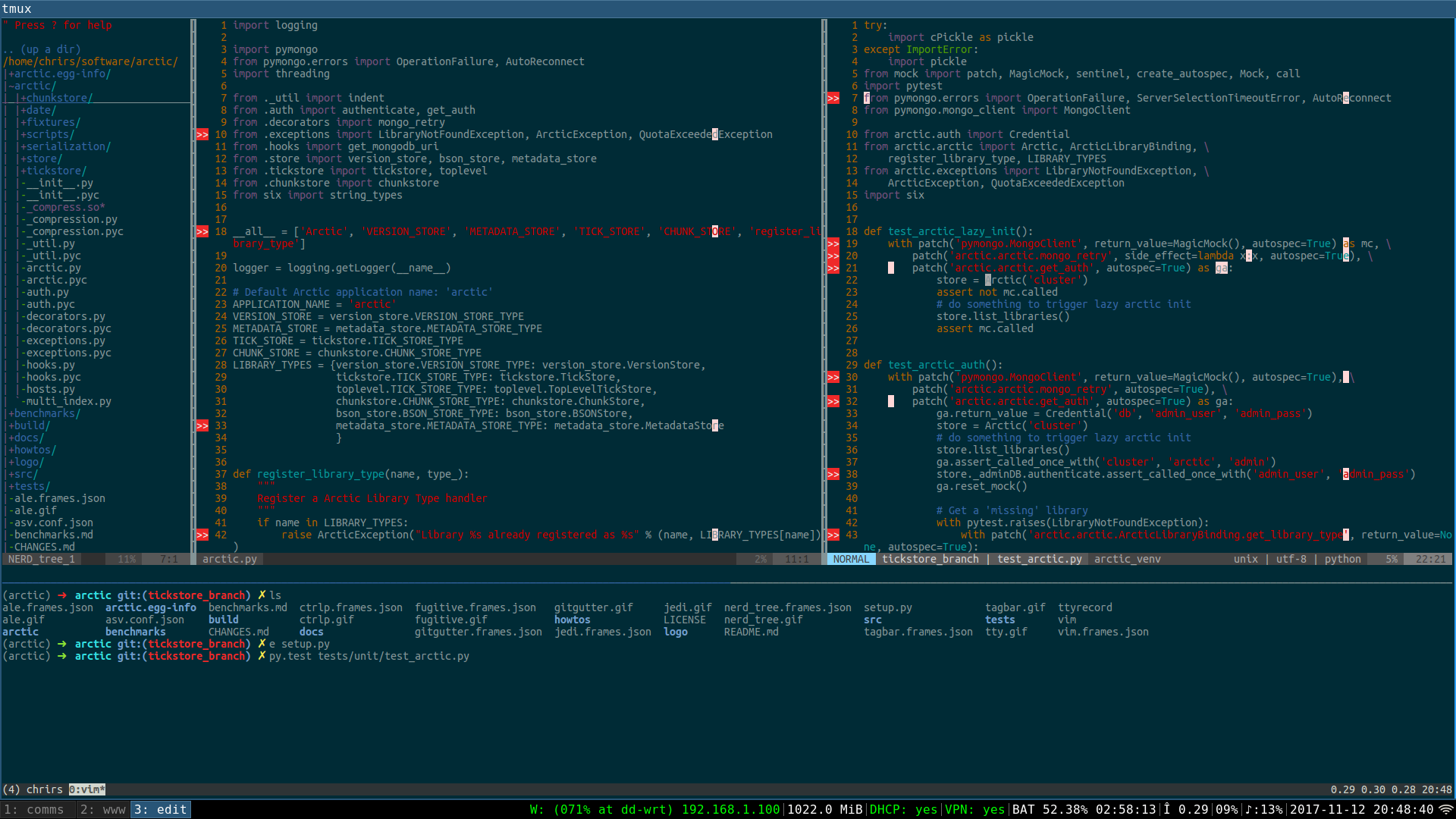 If you've made it this far I hope found it useful.