It is a fact universally ackowledged that the Raspberry PI is a thing of beauty. I recently stumbled across some performance test data I collected earlier this year concerning the network performance of the little things, in particular when using the (Oracle) Java Virtual Machine (JVM) versus native.

At the time we were building a distributed NoSQL database built on the JVM and the Rasbian folks had recently added the Oracle JVM to the Raspian repositories. To demonstrate how a cluster of machines running the database would fare, we needed a cluster. We used AWS to build a cluster in their Ireland availability zone but I thought it would be much more fun to demonstrate a physical cluster and designed a 64-node Raspberry PI cluster demo that we could show off with and would be reasonably portable. I was convincing enough to secure a few Raspberry PIs to test but the company didn't survive long enough to publish anything about either the database or build the cluster.

In theory, the network card on a Raspberry PI model B should be able to deliver a bandwidth of about about 100 Mbits per second. This would certainly handle many database transactions per second (or a bunch of web traffic or make for a decent media server), but sometimes there is a semantic gap between what is advertised and the reality. I'd also heard various horror stories regarding former JVM network-stack implementations. The question I wanted to know was how good the Oracle JVM would be at performing network I/O operations on a Raspberry PI.

Specifically I wanted to benchmark the network I/O performance between two Raspberry PI units and also between one Raspberry PI and a conventional server over TCP.

Our inventory for the test is as follows: 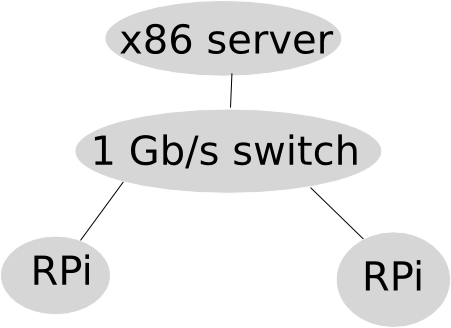 To measure the native network bandwidth (as seen by an application), I used a free-and-open-source benchmarking tool called iPerf:

For the JVM I used a simple Java I/O test-harness (available on my Github) that I had previously built to profile the network and disk performance of various cloud providers (Amazon, Rackspace etc.).

The transfer rate over a few minutes for each of the four scenarios is shown in the plot. 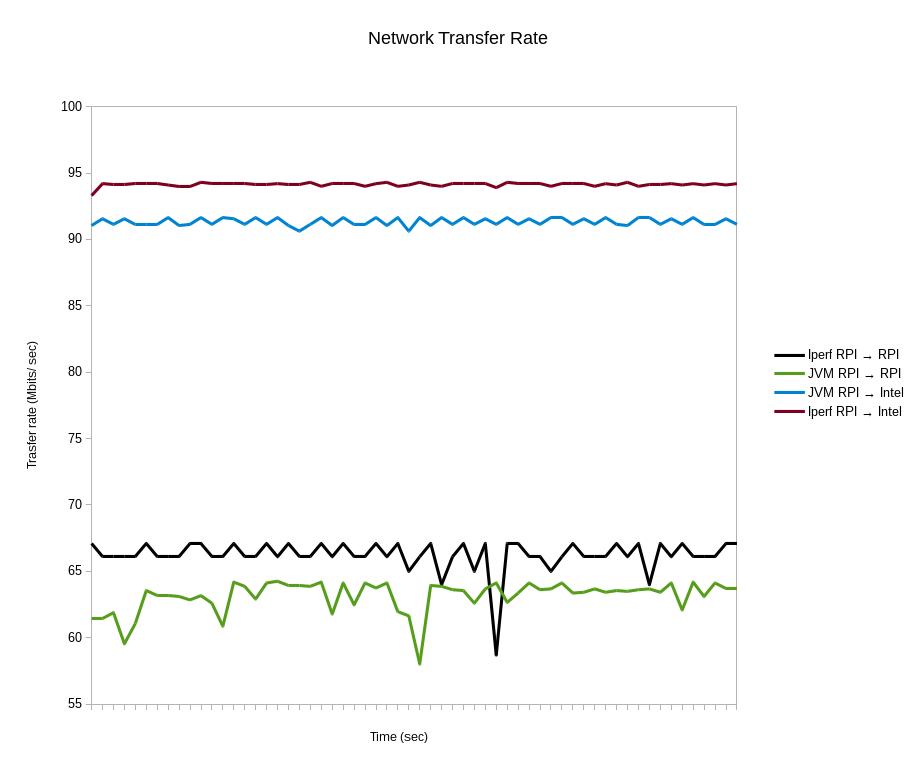 The key features I see reading this plot are:

None of these results are too surprising but I was satisfied that they would do the job.